You are browsing the site archives by date.

The Touring Car Masters are absolutely brilliant! They’re keeping the classic rivalries of the 60s and 70s alive in the modern day, and don’t they do a great job of throwing those beautiful cars around like they stole them?

Mustangs, Monaros, Falcons, Toranas… what more could you want?

Here’s what I know about this one…

Pretty clear which of the brothers got bragging rights at the end of this one.

Here’s a few minutes of burnouts and drag racing starring some magnificent Holdens and Fords going head to head at Perth’s Motorplex.

Some classic Holden V Ford stuff going on in this one.

Ken Block and The Stig running amok in some Fords

This Commodore driver is a nong 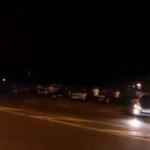 What a bloody nong! I reckon he hasn’t even turned off traction control.

There’s something that hurts about hearing PB talking about his plans for quite a bit more racing to come after the event at Targa West where we lost a legend.

Skaife gets fired up

Mark Skaife was an aggressive driver, but he didn’t limit his competitive spirit to the race track. He’d get into on a bloody panel show too if you gave him half a chance. Never short of a harsh word or quick jab, Skaife sure knew how to let off some steam when his blood was boiling.

Watch below as Skaife gets fired up!

Back in 2005, Mark Skaife and Marcos Ambrose were fierce rivals and they didn’t mind getting their elbows out on the racetrack.

Check out some key Skaife versus Ambrose moments from the 2005 season and watch these two go head to head on and off the black stuff.

Marcos Ambrose, who had joined forces with Dick Johnson Racing as they amalgamate with Team Penske to take on the 2015 v8 Supercars championship has decided to step back from the lead driver role and allow Scott Pye to take his seat for the remainder of the season.

The explanation offered by Ambrose is that he feels he’s not up to grade to develop the DJR Team Penske Ford Falcon FG-X to a competitive package due to his lack of recent experience in the series, and that Pye, who was driving in the series full time last year has a better chance of improving the cars performance.

The current word is that Ambrose will take up the co-driver role for the endurance races later in the year but there’s a flurry of speculation throughout fans that we’re not getting the full story.

Claims abound that Ambrose has had to step aside for a multitude of other reasons, including:

What a mess! Chaos and guess work all over the place.

Looks like we’ll have to waiting and see if the full story comes out later in the year.

In the meantime, Ambrose’s competitors appear to universally agree that he’s done a good job in the two rounds he’s raced so far this season. At Adelaide Ambrose out-qualified the other Fords in the field and made the top 10 shootout. He would go on to finish 12th in that race despite his team making a strategic error by putting too much fuel in his car during a pit stop.

Ambrose sits 12th in the championship standings and his competitors suggest he hasn’t given his comeback a fair chance. It’s hard to argue with that based on his results in the mere 2 rounds he has contested, both of which have been on street circuits.

Check out the video.